The Whiteridge Institute for Fine Arts is an establishment designed to mold the young minds of tomorrow, however most students thought prison was a better word for it. On an uneventful Saturday afternoon, the hallways were devoid of any life except for a handful of individuals. Funnily enough four of these people happened to be students no less, a group of ingrates (their teacher's words not mine), who were forced to spend this possibly carefree afternoon stuck in detention. Bret, whose dad was on the board of admissions for the institute, was one of said students and had somehow managed to piss off the headmaster. Under normal circumstance he would serve this sentence alone but his friends; Andrés, Robbie, and Zachary decided to suffer in solitude along with him. Andrés was the groups resident "Wiz-Kid, calculating each punishable action the group required to earn their eventual stay in detention alongside their delinquent friend. However, their punishment wouldn't last much longer as an unprecedented weather phenomenon soon struck the building, resulting in each of the boys being switched into the body of an administrator still currently working inside the Institution. 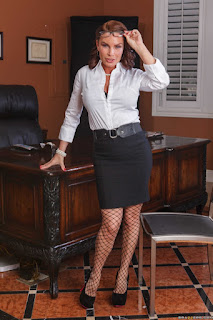 Leslie Strickland (Age 48) was known around the Institution as being uptight, high-strung, and a woman of no nonsense. After all she was the Whiteridge Institute's Headmistress which meant she ensured it remained in a constant state of control both on and around school grounds. At the time she had been filling out a progress report to email to the Institutes Board of Directors when suddenly the Institute seemed to be struck by what she believed to be lightning. Strange energy radiated outside her window, subtle tremors beginning to echo beneath her feet as the sound and light within her office seemed to intensify. As the humming and brightness began to gradually overwhelm her Leslie glanced over at the office phone in a desperate attempt to call for any sort of assistance before everything went dark.